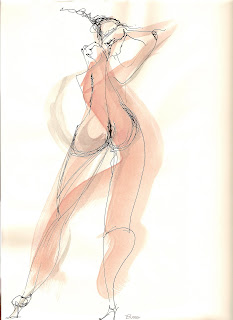 Written by The Poet Spiel

Making it in the arts is a wacko process. Last season's American Idol phenomenon, Adam Lambert,fell to a kid with one-tenth Lambert's talent. I saw some old friends on the super-finale of American Idol. Certainly you know one of them, Steve Martin, but I doubt you know the other, David P. Jackson, who played back-up bass for Martin.

Jackson stopped by my place in Pueblo West while doing minor gigs in Colorado a couple of weeks before that performance. He reminded me that Martin was a big fan of my art in the 60s when the three of us were Hollywood buddies struggling to make it. I told him that Martin admired one of my drawings but regretted that he couldn't afford it. If I'd known then what I know now, that Martin would become a superstar and a major collector of American art, I'd have wrapped that drawing in my own flesh and given it to him.

None of us was rich or famous, but we were kick-ass happy trying to get there. With all those big talents we hung out with, we celebrated every step along the way. We believed in ourselves; we believed in each other.

But life is weird in the arts. Talent does not guarantee fame.

I met the talented Peter Burg years ago performing original poetry at Pueblo's classic Tumbleweed Bookstore. He showed tremendous skill at the art I love. I learned afterwards that Burg is best known in Pueblo as a blues man performing everywhere with his group Peter Burg and Blue Suburban. Guess what? As a kid he worked in a Pacific Palisades music store where thee Randy Newman hung out, and they talked about the songs Burg was recording!

Guess what else? Burg is an excellent visual artist with a degree from CSU-Pueblo. He also drives a school bus and lives better than many musicians because he drives a bus.

The mellow-voiced music man began his journey in 7th grade with his first band, The Valours. He went on to write acoustic songs, was one of the first professional skateboarders, was a singing waiter and appeared on radio and TV. In 1980, he did the Hollywood circuit with his own pop/rock band. At 23, he pierced his ear with a friend and they, "dedicated their lives to music." But Burg's ADHD and multi-talents kept him restless. In 1983, after a three-month Alaskan tour where he performed at the Anchorage Sheraton, he landed in the mountains of southern Colorado where he figured life would be more affordable than his old southern California stomps.

His background in art is considerable. His father was a professional artist and his three sisters have art degrees. He enjoys making art and does custom framing to pick up a buck here and there to augment his music career. But each of his attempts to open a gallery, in Blende in 1993 and Rye in 1995, tanked. In 1993, he won Best 2/D Art in the USC Student Art Exhibit and received the Occhiato University Center Art Purchase Award. In 1997, he graduated from USC with a B.A. in art and was awarded the Robert Taylor Memorial Scholarship. While President of the Pueblo Songwriters and Musicians Association, he received the 2004 Excellence in the Arts Award. Did I mention he worked at the Sangre de Cristo Arts Center in 1989 as Assistant Curator and Collections Manager? He was held on probation for one year by Executive Director Maggie Divelbiss and then fired for poor job performance.

Here we've got a maturing dude with a heap of enviable capabilities in music, poetry and art. He is well known and admired in this community for each of them and he drives a school bus in Rye. He receives a fixed salary with benefits and has the summers off to escape from the school kids who remind him of the turmoil he'd forgotten growing up.

Burg had his shot at That Hollywood Town long before Simon Cowell ever said, "You're going to Hollywood!" At the same time Steve Martin, David P. Jackson and I, and other really talented friends, were padding each other's egos whenever the chips were down on making it. Peter Burg was on that same scene.

Frankly, Burg's poetry is among the best I've heard around here. His nude drawings are sensuous and elegant. The art on the cover of his 2007 poetry collection, "Whistles," knocks me out. I presume it's a self-portrait: a whimsical sketch of a torso-heavy man with broad California-beach pecs, a silly red-lipped grin and wide-open eyes focused straight ahead saying: "Here I am!"

Does he still wish for a breakthrough with his music career?

"Sure I do," he tells me, "but realistically it won't happen. Pueblo is not a musical hub."

The Poet Spiel is a lifelong artist whose work is published internationally in scores of independent journals. Learn more about him at: www.thepoetspiel.name