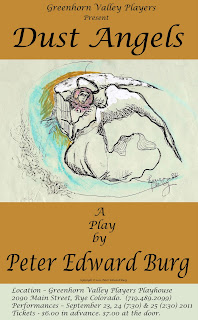 Rye musician and writer, Peter Burg’s second play, “Dust Angels”, will be performed at the Greenhorn Valley Players Playhouse, Rye, on the 23rd, 24th at 7.30pm and 25th September at 2.30pm. This is Mr. Burg’s second original play, the first being “Clown Town” which was put on here in 2009. 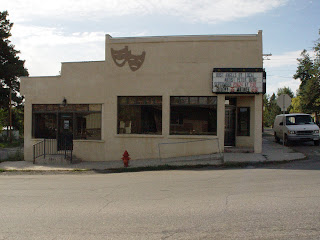 “Dust Angels” is set during the Dust Bowl era in 1934 and is about a small rural community on the fringe of a prairie in southeastern Colorado near the Kansas line. Remnants of three broken families have banded together to form an alliance against the hardship of their existence. The characters are all poor. Some are educated, others are rich with life experience, and others downright ignorant but all have an innate ability for survival with a strong belief in the hard work ethic. They persevere, believing that this strange weather and economic upheaval will subside soon and better times will eventually come.

But the bleak day to day existence is their only reward for their endeavors. These people have been at the bottom of the heap and can’t get any lower.

Helplessness begins to eat away at the group. Their interaction together is their only saving grace. Their only news of the nation is from the radio. As they interact with it, some view it as both a life line and a curse. Some confess their sins and others tell stories.

It was inconceivable that America could falter. And as it did Americans were dumbfounded, becoming mentally mute. This once virile country was now impotent. How does one reckon with a fallen angel?

This is both an historical story and one that is bitingly topical in terms of today’s deep economic depression. How does one come to terms with a world apparently without prospects and without hope? This small but resilient group has dug in on an isolated southeastern Colorado farm, to do battle with nature itself, theirown inner turmoil, the economic crisis, and their luck of the draw. It is difficult to see through the dust but there is surely something ahead! This is a very relevant modern play about the trials of life, the strength of the human spirit and about man’s eternal sense of hope. Above all, it is a play about the pressures that affect every one of us everyday and about how we cope with this adversity, how we deal with personal relationships and about the commonality and love that in the end binds us all together. That- then and now- we will eventually survive adversity is a given. We are a race of survivalists and therefore have no other option but to prevail. It is the “how” that is the lesson here. The solution and transcendence must come in spite of who we are. Jean- Paul Sartre, the French philosopher and playwright, once wrote at the conclusion of his play “No Exit” that “L’Enfer- sont les autres- Hell is other people.” Happily Peter Burg realizes at the end of “Dust Angels” that in the end, all we have is one another- faults, problems and all. All the characters in this play will end up on the side of the angels. 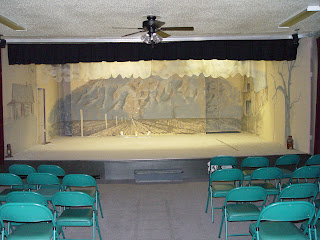 There will be original music composed for the play by Peter Burg and a slide show of archival black and white photographs of the Dust Bowl period. The play is directed by Cliff Pattison and Peter Burg with a cast of eight local actors and actresses, whose ages range from nine to Eighty one.

Please come and support this original production solely created and performed by local residents of our community. In life and in the theater, there are those of us who are actors and those that are audience- but neither can exist without the other! 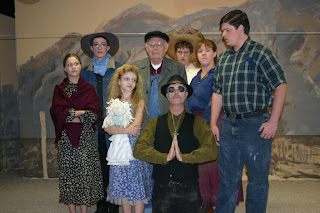